Woot took this week off but I didn’t!

Today I finished my first painting in ~5 years. 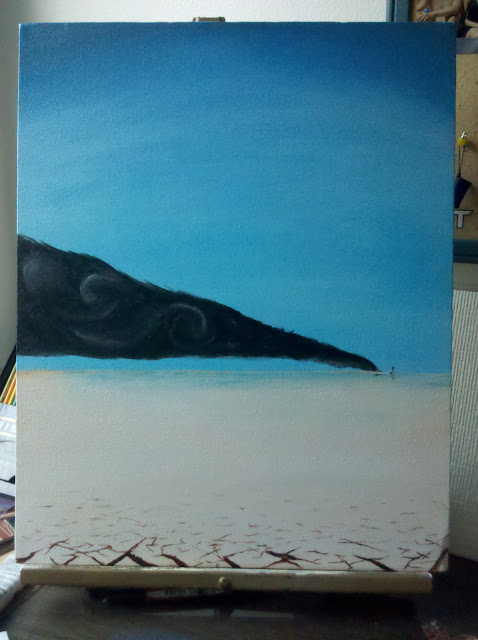 It’s an acrylic on 14″ x 22″ canvas inspired by The Right Stuff, a best-selling book by Tom Wolf most widely recognized by the 1983 movie.  The movie follows man’s journey from breaking the sound barrier to America’s early space missions.  Both the book and movie do a great job of avoiding the easy route of cold war era chest pounding patriotism instead focusing on the personality, brilliance and guts of the men that pushed the envelope in an era where limits were being broken.  In this context Chuck Yeager holds a unique position.  Yeager was the first man to break the sound barrier in an experimental Airforce plane called the X-1.  Although this accomplishment was considered a military secret everyone knew and it established Yeager as a benchmark for every test pilot of the time.  The men who eventually became world-famous as the Mercury 7 idolized Yeager as the undisputed champion of “the right stuff.”  What really makes the whole movie and make me think of Yeager instead of Glenn or Shepard or any of the other astronauts is something Dennis Quaid, who played Gordon Cooper, says at the end of the movie.

Watch out for the possibly nsfw fan dance, but what are you doing watching a half hour of a movie there anyway

Skip to 6.08 to see Cooper but watch the whole thing because the ending of The Right Stuff is what make the movie brilliantly about the men, not their accomplishments.  It is also the source of inspiration for my painting:

It’s a great movie and worth watching.

Hark a Vagrant or How I Stopped Worrying and Learned to Love Kate Beaton: http://www.harkavagrant.com/index.php?id=327

You know how I talked about Mitch Clem a couple weeks ago, well his new comic might just be my new favorite.  In case you didn’t know I’m a pretty big  Against Me! fan and Baby I’m an Anarchist is on of my favorite songs by them.  Anyway, check it/them/my old post out.

In other news, I’m moving to Norway

Networking is for cool kids: